Some of the most popular collectible radios were made by Fada in the 1940’s. 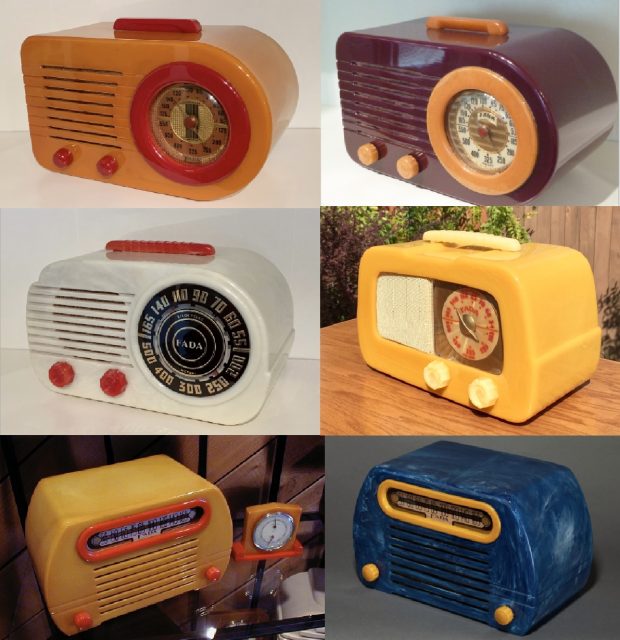 At the start of the 1940’s, the Fada corporation began moving away from boxy designs (though their Catalin radios of the 30’s are beautiful), and came up with one of the most famous radios of all time, the Fada “Bullet”. 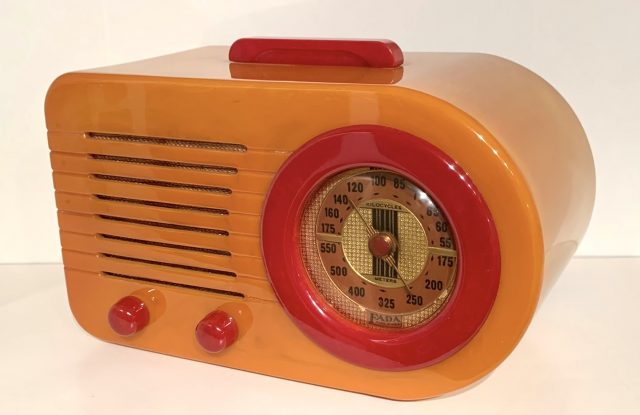 This is a streamlined 1940 Fada 115 Catalin radio that was originally an alabaster white with red trim. The Catalin case has oxidized over the years to a beautiful butterscotch.  Luckily, the red Catalin maintains its color. 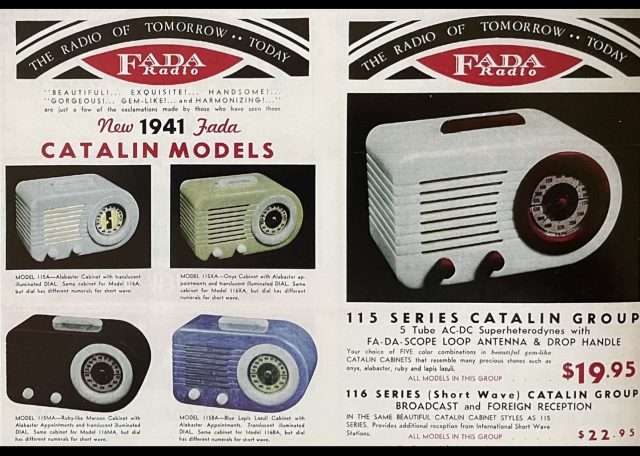 Here’s an old Fada advertisement from 1941 that shows the original colors of the Bullets.  The largest photo in the ad is what the radio in the previous photo originally looked like.  Too bad I couldn’t have bought it for that $19.95 price!  The four basic colors of the cases were alabaster white, onyx green, maroon, and lapis blue. 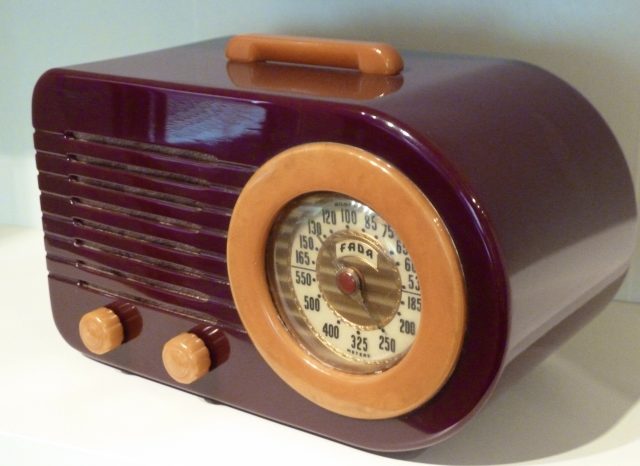 This maroon Bullet is the first Catalin Fada I bought.  It’s the 1946 post-war Model 1000.  There are differences in the dial, the knobs, and the handle from the pre-war model.  A friend of mine sold it to me after he got it for a dirt cheap price at an auction.  Later, he became a radio collector, and eventually I sold it back to him (at the price he sold it to me).  The size is about 10” W, 6” H, 5” D. 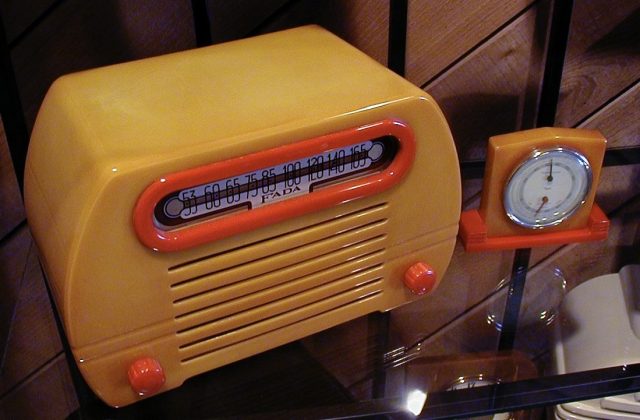 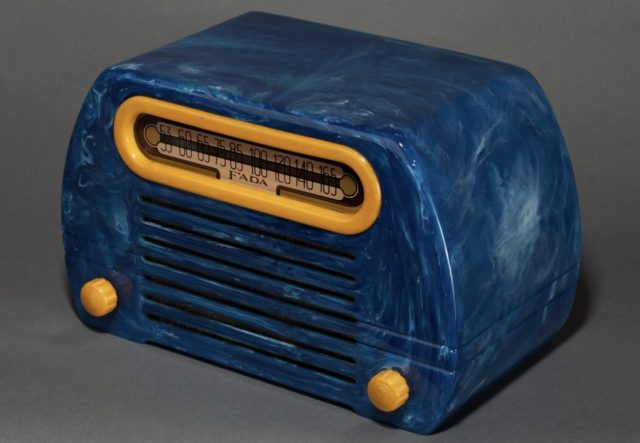 Another original design that was started in 1940 and continued post-war was that of the Fada 252 & Fada 652.  The two models look nearly identical.  The 252 has gumdrop knobs, 8 grille slots, and three grooves around the case.  The 652 has pinwheel knobs, 7 grille slots, and two grooves around the case.  The nickname for this radio is the “Temple”.  It’s one of the larger Catalin Fadas, about 11” W, 7” H, 6” D.  The photo on top (butterscotch & red) is the first Temple I bought.  The second Temple I got was blue.  My individual photos of it are lost in some digital void, so the second photo is a Fada that was owned by a friend.  Both of these Temples are 652’s.

Here’s part of my collection from about two decades ago.  My first four Catalin Fadas are displayed and marked 1, 2, 3, & 4 below.  You can see the sizes of the Fadas compared with other radios in this old photo. (Click to enlarge.) 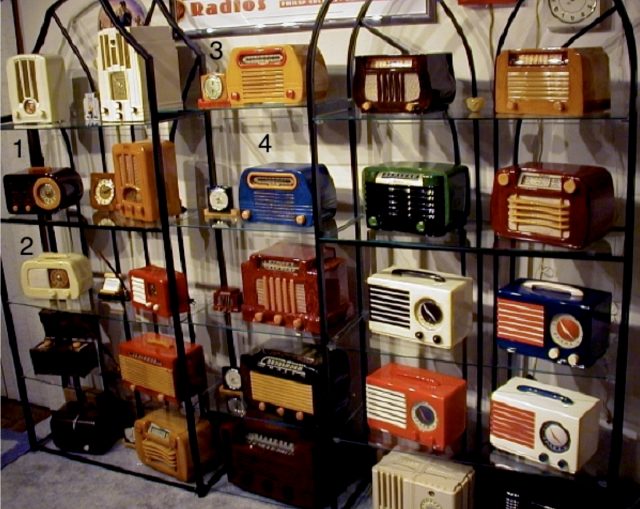 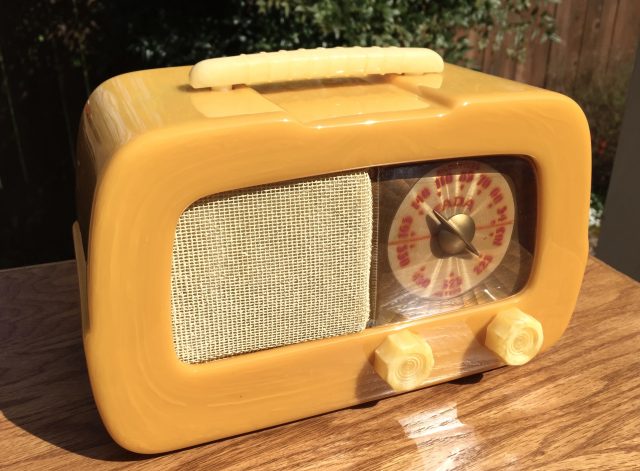 This is a 1946 Fada Model 711 “Diptop”.  It’s about the same size as the Bullet.  When I first bought it, the case had been polished back to its original alabaster white, but had started getting its patina back.  You can see how light it was in the large radio display above, and how it had returned to a butterscotch color in the lower photo. 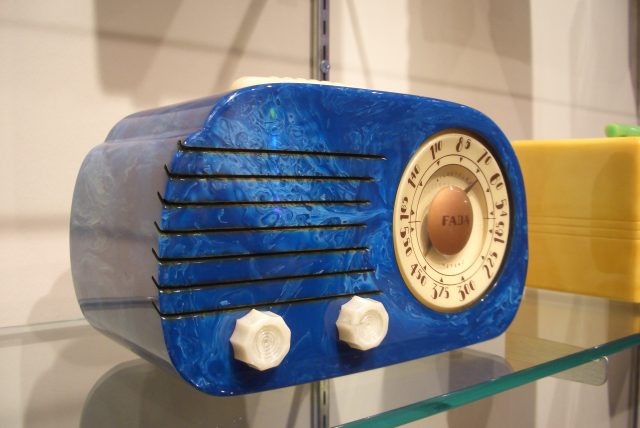 Another 1946 model that was close to the size of the Bullet is the Model 700.  This one is a friend’s rare blue Catalin version.  I owned the more common maroon Catalin one…seen here on the right in an old photo. 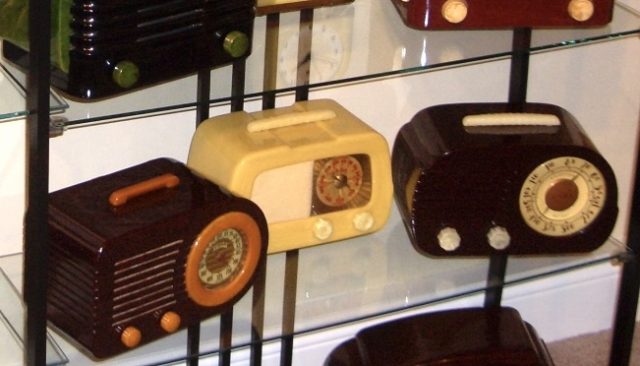 As Fada transitioned their cases from Catalin to polystyrene in 1947, they came up with the “Cloud”. 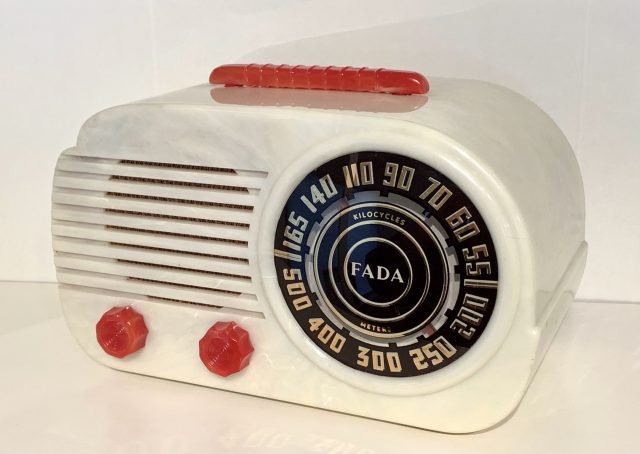 You can see that the white swirled case of the Model 845 does look like a cloud.  The case is not quite as impressive as the Catalin models, but it still looks great, has a cool dial, and maintains the color it was meant to be.  It would’ve been cool if Fada had produced another round of Bullets in polystyrene in the 1941 colors, so they would have kept their colors as originally conceived. 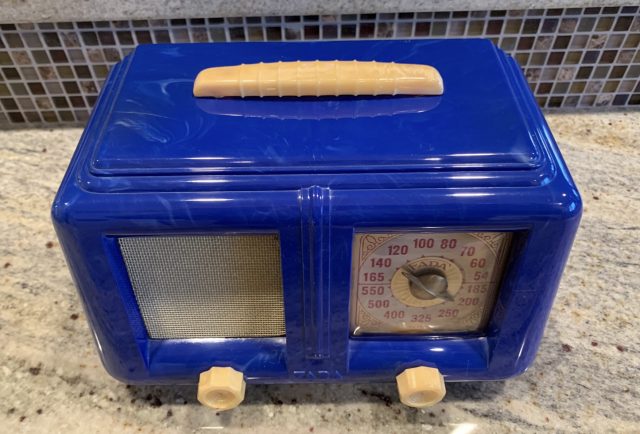 The biggest problem with Catalin cases not keeping their color was with the blue models.  They turned green, and eventually brown.  Even after they’re taken back to blue through a careful sanding and polishing process, they’ll oxidize again to green/brown.  Polystyrene allowed Fada to have radios that stayed blue.  The above cobalt blue 1947 Model 1005 is a pretty rare radio.  It’s a shame radio makers didn’t produce more blue models, because they’re certainly popular with collectors (although rarity is part of the collecting equation). 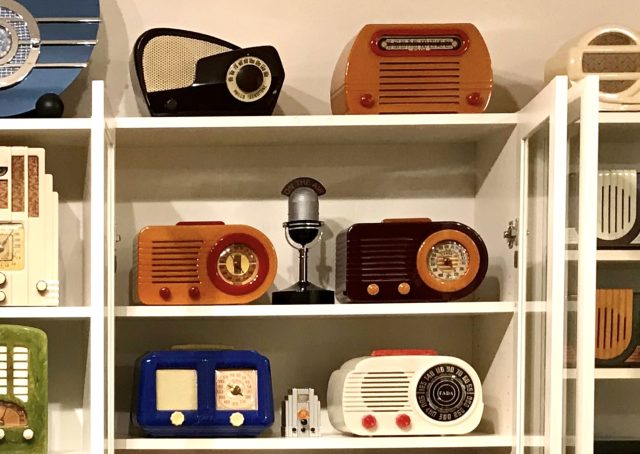 The Fada corporation came up with some of the best designs for plastic radios, and the likely reason so many have survived is how cool they look.