Finally broke down and bought a real Sparton Bluebird radio.  I’ve loved the look of the Bluebird (by famed industrial designer Walter Dorwin Teague) from the first time I saw it. 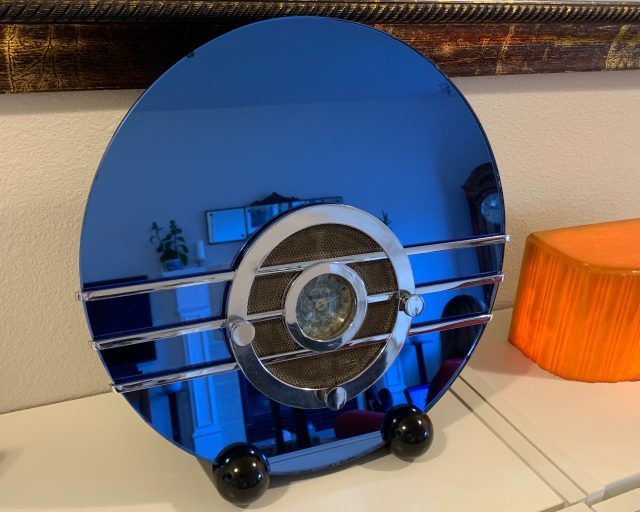 The design of the Sparton Bluebird is extremely Deco, with blue mirror & chrome.  It was so original that no other radio looked anything like it.  Descriptions of the radio mention the “Streamline” design of the deco era represented by the three lines of chrome that span the front. 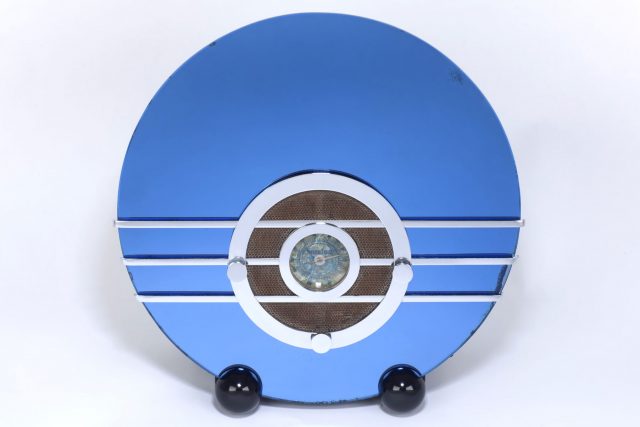 (Professional photo of my radio as seen on the Decophobia website.)

Great art (these radios are displayed in museums) lends itself to personal interpretation.  Why was the name Bluebird chosen, as opposed to anything else that was blue?  A real Bluebird flies, and one could certainly look at this “bird” as a tri-wing airplane in a blue sky.  The three chrome lines get smaller as they go down, just like the three wings of the airplane.  The inner ring would be the fuselage, and the outer ring could represent the larger circle made by a moving propeller.  The black ball stands are the plane’s tires. 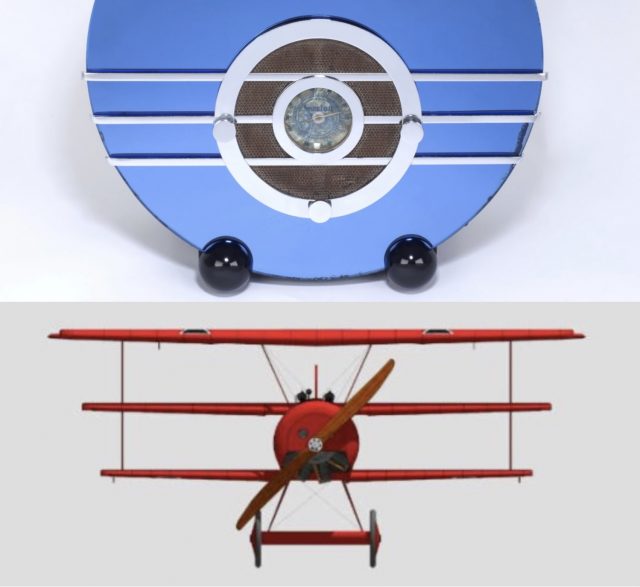 At least that’s one interpretation of the design.  It may not be what Teague had in mind, but once you see the design that way, it’s a little hard to believe it wasn’t intentional. 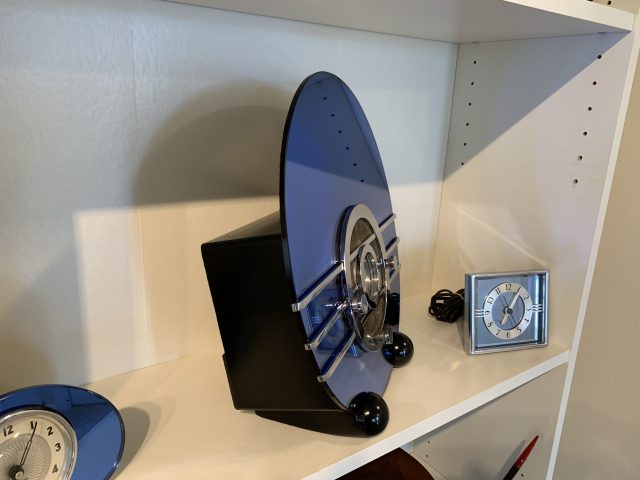 You can see how the radio leans back, which let’s us see the mirror better, and makes the controls more accessible.  It also gives it stability to keep that big piece of glass from tipping over.  In fact, the Bluebird originally came with an optional blue mirror for the radio to sit on.  It was the exact same size as the main mirror, and could be fabricated to replace the radio’s mirror if necessary.

Here’s a photo of the real Bluebird next to my long-owned reproduction radio from the 1990’s. 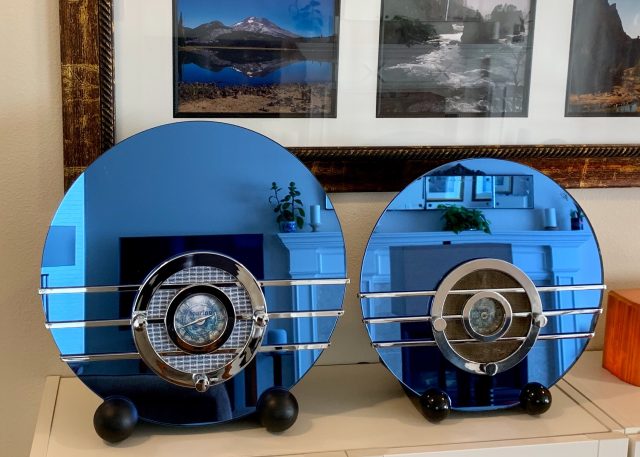 The one on the left is a little over 20-years old, and the one on the right is over 80-years old.  The reproduction’s mirror is larger (16-inches), and the feet were originally chrome.  I painted them to look more like the real Sparton, and added the Sparton dial image.  Besides the size, the biggest difference is metal vs. plastic for the chrome, and of course tubes vs. transistors for the sound.

Why was the reproduction made larger, and why were the feet chrome?  In a print ad from the 1930’s, it incorrectly says the mirror is 16-inches, even though it was really 14-inches.  Another ad mentions “silver ball supports”, even though they were black.  Or, maybe they just thought the reproduction shouldn’t precisely match the real thing.

After selling most of my radios, it was nice to add one…especially the historic Sparton Bluebird. 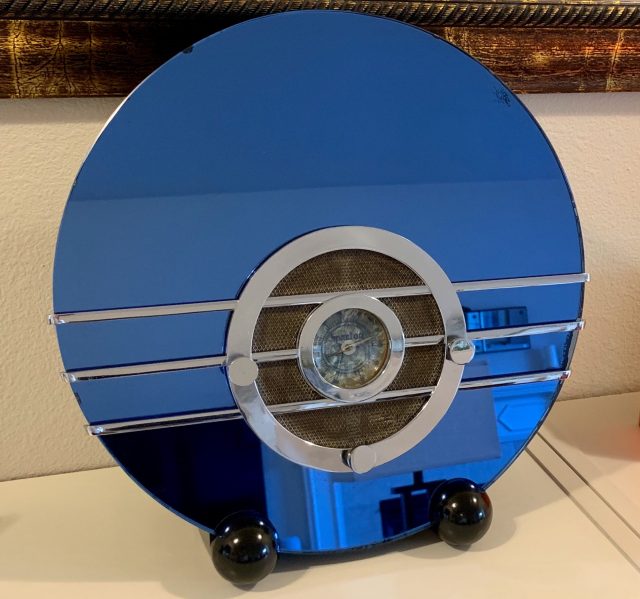 Extra:  Saw this photo on a radio discussion page.  It’s a Sparton Bluebird in the 1936 Jimmy Stewart movie “Born To Dance”. 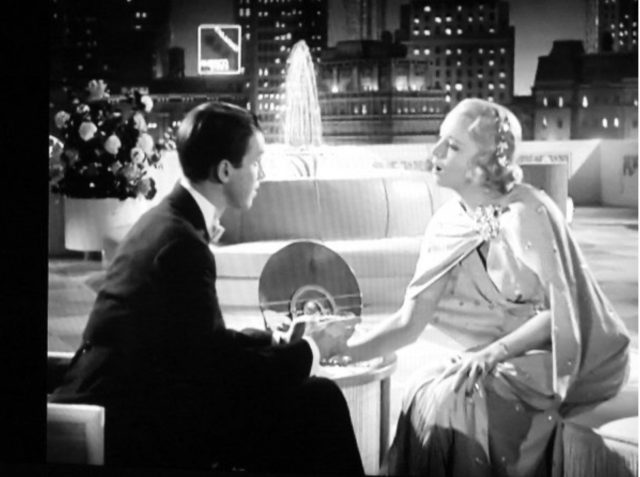 The discussion determined it was the blue mirror version, and that it’s an optical illusion that it looks clear.  Ah…the Deco era had such style!

Update Sept. 2022:  Added another Sparton Bluebird (the one on the left). 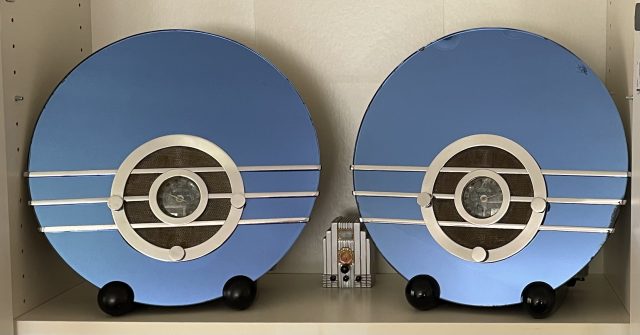 Update Oct. 2022:  Sold my first Bluebird, and kept this one below, because it has a really nice original mirror.  It’s displayed next to another 1936 radio, an Emerson Tombstone.  What a contrast in designs, yet they provided the same service.  The reproduction Bluebird is on top of the cabinet. 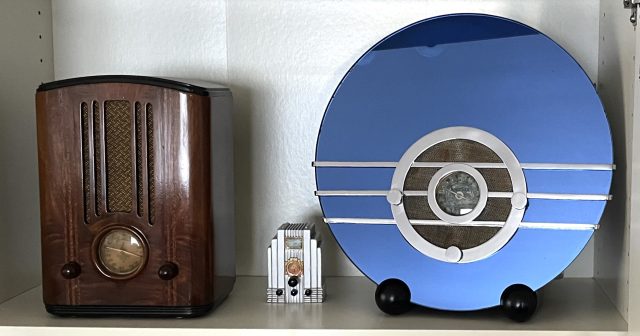 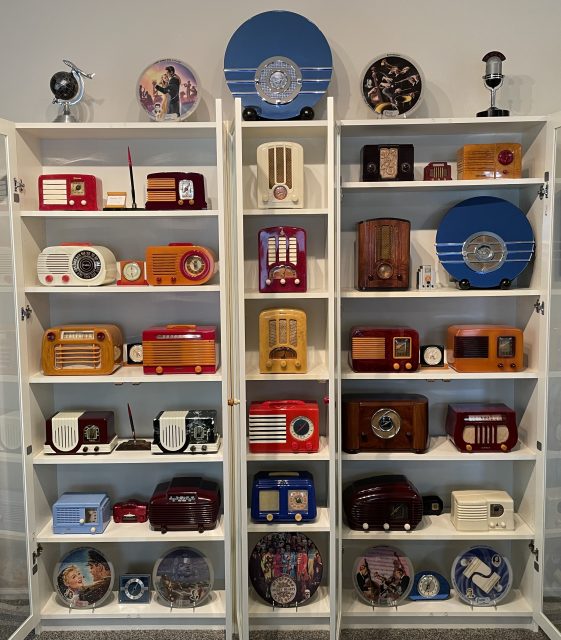