Symmetry is pleasing.  It gives us a natural balance.  Things just look right with even sides and a nice easy-to-understand presentation.  People who have symmetrical faces are considered more beautiful or handsome.  Most radios are symmetrical.  One side matches the other.  So, why did someone design a radio that looks like this? 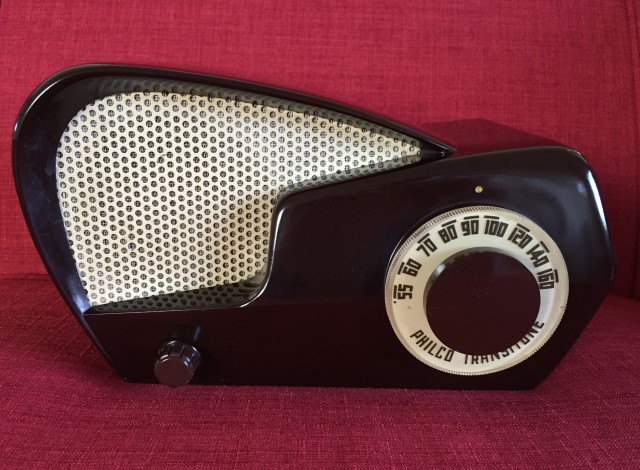 Basically, the whole design of the Philco 49-501 is amazingly asymmetrical!  The only things symmetrical in the design are the round knobs (although of greatly different sizes), and the bottom, which is rectangular.  As we look at it, the left side of this 1949 Philco “Boomerang” is a large sweeping arc.  The arc itself is uneven.  The radio’s right side has two fairly straight surfaces that are two different sizes at two different angles.  The front of the radio is more curved than flat. 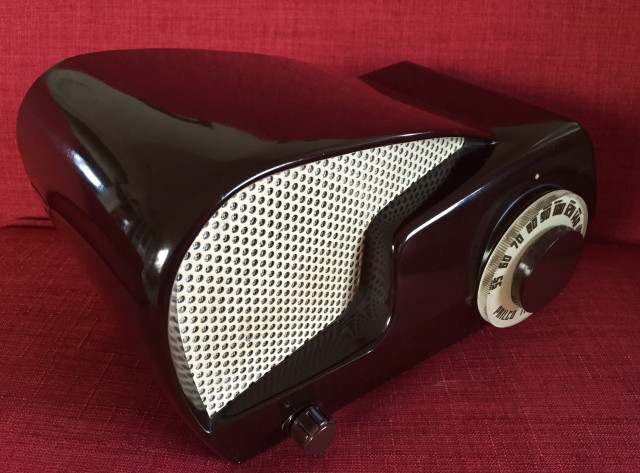 And what’s with that speaker opening?!  Nothing about it is equal.  The two levels of the Bakelite that form the bottom of the speaker opening are two different sizes at two different heights.  The Bakelite lip of the big curve angles into the speaker grille with a wildly changing sweep…from small to large to small again.  It would be expected that the big curve would naturally join the top of the radio even with the front.  But instead, the top of the curve narrows and meets the right side of the radio farther inside. 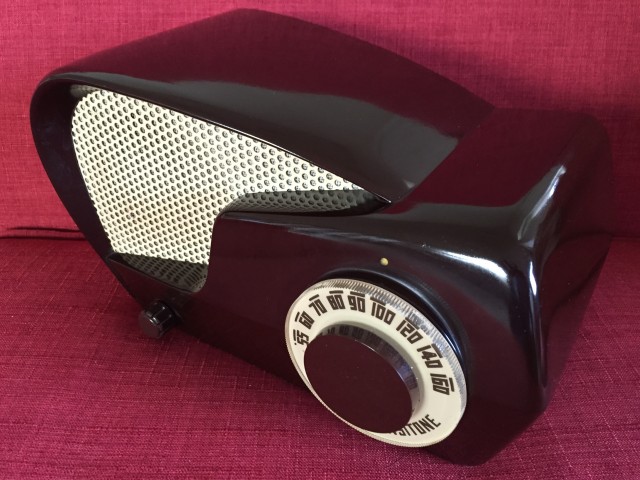 There is no designer credited with this Philco model.  It’s a shame, because it’s an ingenious asymmetrical design…extremely well thought out.    Some people think it’s weird or futuristic looking (often called “Jetsons” in eBay listings).  But, it’s one of my favorite designs, because it’s so complex and bold.

Below is the ivory painted version of the Philco Boomerang.  This photo correctly shows the differences compared with the brown Bakelite version.  The grille is brown, the tuning dial has a brown background with white numbers, and the knobs are white.  Often, Boomerangs have incorrectly matched parts, or are painted wild colors.  This is the only painted version that’s original.  Some of the paint jobs can look pretty cool (stay away from one that looks like camouflage and claims to be “Catalin colors”).  You definitely want to know what you’re getting.

The radio is approximately 11-inches wide, 7-inches high, and 6-inches deep.  But really, it all depends on where you measure it, because nothing is even!

For a more symmetrical radio that’s still highly original, check the one in the article below.

3 thoughts on “Philco Boomerang, A Study in Asymmetrical Design”